That’s a lofty title, I know. And believe it or not, I know her. Even more amazing (to me) is that I’m married to her.

One might think the world’s best mom would be someone with years of motherly experience and a number of kids — someone who has been doing it for a long time. My wife, Katie, doesn’t come close to qualifying under those terms. You see, we’re new parents. Our first son, Randol Thomas, was born on Thursday at 12:56 a.m. at the incredibly young gestational age of 25 weeks and 4 days. That happy moment had a sad ending when our baby boy lost his life later that morning at 5:20 a.m. after struggling for hours to try and breathe with what we knew were severely underdeveloped lungs — something we knew would be an issue after my wife’s water broke at just 18 weeks.

So how could she possibly be crowned ‘world’s best mom’ when she has only had one child, who only lived for a few hours? Allow me to explain…

When Katie’s water ruptured at 18 weeks, she was told that she would likely go into labor within the next three days. Her odds of lasting to viability (24 weeks) and giving birth to a child that would live long term was at best 5% and probably less than 1%. She was told that many women in her situation choose to terminate. Not one to judge, that comment simply went in one ear and out the other. It wasn’t an option for her and never would be. Because when you’re the world’s best mom, you never give up on your child, no matter the odds.

When she went into labor two days later, she spent a frantic few hours at the hospital and prepped for the delivery of a 19-week old baby. As scared and panicked as she was, Katie managed to ask questions about what would happen to her baby after birth, including a baptism and funeral arrangements. Because when you’re the world’s best mom, you want the best for your child.

When her body then shut down labor a few hours later, she was ultimately sent home and told to stay on strict bed rest. It was then that she became incredibly germ conscientious. She knew that if she developed an infection, she would lose the baby. She had me cleaning the house all the time. If friends or family had even a hint of a cold, she asked them not to visit. When I brought her cups of water, if I accidentally touched the lip of the glass, she made me empty, wash and refill it. She even banned me from kissing her. None of this surprised me. Because when you’re the world’s best mom, you do whatever you have to for the health and well-being of your child.

When she reached 23 weeks and was admitted to the hospital for the rest of her pregnancy, Katie did so with a smile. She brought comforts of home with her and planned for a long, long stay. She put a day-by-day countdown on the wall and rejoiced when each evening turned into a new day. Even though each passing day meant another day of bed rest, agonizing muscle atrophy and stir-crazy boredom, it also meant another day that the baby had grown within her. It meant one more day closer to the magic preemie window of 28 weeks. And when you’re the world’s best mom, you cherish all of your child’s accomplishments, even if that’s as simple as one more day in the womb.

When her nurses would come in to check on Katie during her stay in the hospital, she rarely let them leave without engaging them in a 15-minute Q&A on every topic you could imagine relating to her situation. She relished every opportunity she had to absorb information — what to expect, what the nurses had seen in their careers and what she could do to improve her outcomes. Because when you’re the world’s best mom, you want to know all you can when it involves the life of your child.

When Katie went into labor again – this time for good – and the attempt for a vaginal delivery had to be abandoned due to our baby’s crashing heart rate, Katie gave her doctors the go-ahead to proceed with an emergency C-section, a procedure that would mean waiting longer to try for our next kid and one that would potentially limit the number of pregnancies we could have long term. It wasn’t a decision she made lightly, but it also wasn’t a very hard one to make. Because when you’re the world’s best mom, you’re willing to make sacrifices for your child.

When our baby was fighting for his life in the NICU and the neonatologist came up to discuss possible next steps, Katie asked her about nitric oxide. It wasn’t even a treatment option that was presented to us, but Katie knew about it. She had read that it helped other babies in our situation. The doctor said it was an option and they’d be happy to try it. All because Katie knew to ask for it. Because when you’re the world’s best mom, you do your research and become your child’s best advocate.

When the doctors told us that Randol Thomas wasn’t going to make it, Katie asked her nurses what it would take to get her from her delivery room down to the NICU to see her son while he was still alive. When her extraordinary nurses (seriously, they were amazing) understandably questioned whether that was even possible given that she had just undergone a major operation, Katie rephrased her question into a statement that was more like, “I need to see him. Please. Just tell me what I need to do.” From there, the nurses came up with an improvised game plan that included a heavy dose of medication just to get her out of bed and into a wheelchair. During the transport, my determined wife uttered no cries of pain. She was wheeled down to the NICU and was able to hold our son’s living hand while singing to him — just a couple hours after her C-section. Because when you’re the world’s best mom, nothing can stand in the way of you being there for your child.

When she was in the NICU, she realized no one had called a priest to have Randol Thomas baptized. We quickly called the on-call chaplain and asked him to come in. He arrived just in time to baptize our little boy. Our son took his last attempted breath during the baptism and his heart stopped beating just seconds after it had ended. It was the perfect ending to his perfect life, and all because of Katie. Because when you’re the world’s best mom, you remember things that no one else does, even in moments of pure chaos.

And when our precious child passed away and the amazing NICU staff brought him up to our room for Katie and I to hold him for the first and last time, Katie invited all of our family members who were at the hospital to share in that moment with us — to take their own turns holding our little guy. Because when you’re the world’s best mom, you want nothing more than to share the joy of your child with those around you.

I am devastated at having lost my son. And I’m devastated that he won’t enjoy what would have been an amazing life with loving parents, including a particularly incredible mother. Watching Katie over these past several weeks has been an absolute inspiration. Her love for our son during his 25+ weeks in the womb and his few hours after birth is a testament to who she is as a person and, now, as a mom. I share this story with all of you in the hopes that it will inspire current and future moms to be as committed and passionate to their own children as she was to our little boy.

Next month, on May 11, I plan to hold Katie close, smile and say, “Happy Mother’s Day.” Even though our son won’t physically be with us anymore, it doesn’t change the fact that my wife is now a mother. And a mother she’ll always be.

In fact, she’s the world’s best. 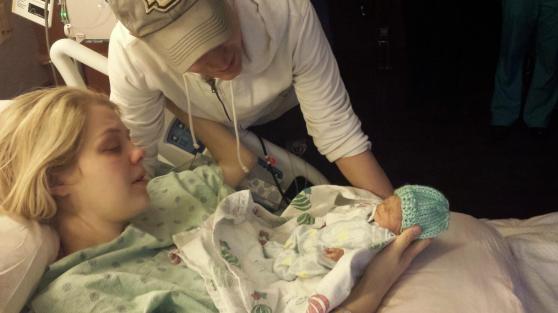